Mochi ice cream, one of the trendiest sweets on the planet!
Team TREHA® @trehalose_sensei
Print
Share

So proud to say, mochi ice cream is now one of the world’s favorite Japanese sweets. Let's discover the secret of its popularity and how you can make this sweet treat for yourself!

Is it truly mochi, or gyuhi?

Mochi (餅) is one Japanese word that is now widely recognized and used around the world. Many of you might know what mochi is, but did you know there is another type of mochi called gyuhi (求肥)? Gyuhi may actually be what you’ve experienced as mochi when you see Japanese confectionery using the white, soft, and chewy ingredient. So what's the difference? Mochi is a Japanese rice cake made of mochigome, a short-grain, glutinous rice. Mochi is a traditional Japanese New Year Food with a long history and important customs behind it. To learn more about the history, customs, and variety of mochi dishes, please read our previous blog.

Gyuhi is made of mochiko or shiratamako (glutinous rice flour) with sugar and starch syrup, which makes it softer and sweeter than mochi. Originally, gyuhi (求肥) was written in kanji characters 牛皮, literally meaning the skin of the cow. In the past, it was made from glutinous brown rice and brown sugar, so it was more tan in appearance instead of the white color you see today. With its coloring and soft texture, it came to be called gyuhi (牛皮). Gyuhi is a confectionery used in Chinese festivals, which was introduced to Japan during the Heian period (running from 794 to 1185). However, at the time, there was no custom of eating cows in Buddhism in Japanese culture, so people started to use 求肥, which means nourishing the cow’s flank, instead cow skin. Gyuhi is now an essential ingredient for Wagashi, traditional Japanese confectionery, and used in various sweets such as daifuku (picture on the left) and gyuhi mochi (picture on the right).

Mochi ice cream is a long-time favorite Japanese dessert using gyuhi and has gained immense popularity outside Japan! Mochi ice cream is normally made from a sweet and pillowy soft gyuhi (mochi) wrapped around ice cream, that often range in flavors like vanilla, green tea, chocolate, and mango. You can enjoy a perfect combination of different textures – the soft and chewy texture of the mochi, and the smooth, melt-in-your-mouth texture of the ice cream. Its beautifully rounded shape is very attractive, and is one of the reasons for its popularity as well.

As food has evolved, so too has the style of mochi ice cream – not only presented in its traditional round shape, but also as a topping for ice cream served in a cup. For example, a world-famous ice cream company has been annually launching a series of mochi ice cream cups as seasonal limited editions, available only in Japan. The flavors are normally Japanese style, such as kinako kuromitu (roasted soybean flour with brown sugar syrup) and mitarashi kurumi (sweet soy sauce with roasted walnut). These Japanese style flavors pair beautifully with mochi, which adds a subtle creamy flavor from the rice. Another ice cream company based in Japan also has a popular line up of mochi ice cream cups. Green tea or vanilla ice cream is garnished with small balls of mochi and sweet red bean paste or roasted soybean flour. Serving this in a cup allows for a variety of toppings to be enjoyed together with the ice cream. TREHA®, the crucial ingredient in mochi

When it comes to making mochi ice cream, the product has to be stored frozen. Mochi dough usually dries out and cracks under frozen storage due to starch retrogradation. While increasing the amount of sugar helps the dough to remain soft and pliable, it also makes the dough too sweet. Using TREHA® maintains the softness and chewiness of mochi dough without giving it a cloying sweetness. It retains moisture by suppressing starch retrogradation, maintaining desired consistency. TREHA®'s remarkable functionality contributes to efficient product planning for chefs by saving time, and reducing food waste. 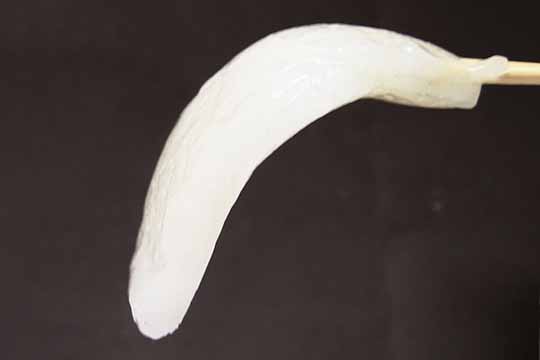 Have you thought about mochi ice cream WRAPS? It is a unique idea to wrap the ice cream with strawberry sauce and mochi, instead of completely covering the ice cream. No special mochi wrapping technique required! (Click here for the recipe) Find out more about recipe ideas and how TREHA® works in our previous blog, featuring talented Japanese confectionery chef Mayumi Mori, the creator of this recipe. (Click here for her interview blog). Chef Mori has been using TREHA® for many years, and she shared us some of her most outstanding Japanese confectionery recipes using TREHA® in this blog.