Oranges come in many varieties and are consumed worldwide. Satsuma oranges for the Japanese is a healthy winter snack tied to warm memories with family and friends.

As in the previous blog, apples and oranges are the favorite fruits for the Japanese. Today, we will talk about “mikan (aka satsuma orange)” and citrus fruits often seen during Japan's wintertime.

"Mikan (みかん)" is a citrus fruit adored by the Japanese, usually referring to Citrus unshu. “Satsuma orange" may sound more familiar in the West. The name "Satsuma" is derived from the Satsuma district, which is now Kagoshima prefecture, where this variety was introduced to Florida, the USA, in 1876. The fruit is popular because of its sweet and moderate acidity for a pleasant refreshment. Besides, it can be peeled by hand, making it easy to snack.

To snack satsuma oranges in a kotatsu heater, "kotatsu de mikan" is a classic winter scene in the family living room often depicted in anime.
Kotatsu is a Japanese heating device, a table attached with an electric heater on the underside of the plate on top. The table is draped with an oversized square coverlet to prevent the heat from escaping. Users extend their legs under the table while sitting on the floor.

Kotatsu has been used for a surprisingly long time since the Muromachi period (the 14th - 16th century). This heating device became prevalent because traditional Japanese houses, made of wood, undivided and well-ventilated, were not easy to heat entirely. Thus, a more efficient way to warm up residents developed earlier than keeping the living area warm. Since cold air stays low even within the house, making residents’ feet hard, it is reasonable to use a heater to warm up the feet. In the cold winter, the family members are naturally eager to get in and gather around kotatsu.

Mikan is indispensable for the family gathering in the kotatsu heater. Once blessed with the heavenly comfort of kotatsu, an exit from it is like pulling a tooth from yourself. People tend to keep necessary items nearby kotatsu without leaving to fetch them. One of them is some satsuma oranges for snacking, stacked in the middle of the top board. There is no need for a knife or a plate to eat the fruit. Kotatsu dwellers can get hydrated and nourished with vitamins while warming up and enjoying conversations with family or friends. Kotatsu and mikan are inseparable in Japanese winter. If hamsters share kotatsu, this is how they get relaxed. Kotatsu is a sweet spot for the whole family to eat mikan, nap, and watch TV together in the cold winter.

Other Japanese citrus fruits in season during the wintertime.

Hassaku orange (八朔), a citrus fruit native to Japan, was accidentally discovered at a temple in Innoshima City, Hiroshima Prefecture, during the Edo period (around 1860).
Being a grapefruit-sized and thick skin, the edible part of hassaku orange is the flesh in the inner bags. Unlike a citrus fruit, the flesh is crisp and flakey and has a moderate sweetness, acidity, and slight bitterness. Although the sugar content of many citrus fruits increased due to breed improvement, there are sizable admirers for the taste of hassaku orange, which is simple and somewhat nostalgic. The harvesting season of hassaku orange begins around December and finishes around mid-February. The fresh harvest is typically stored for 1-2 months and de-acidified before shipping. In fact, "hassaku" means August 1st of the lunar calendar. The citrus fruit was named after the comment made by the chief priest of the temple where hassaku orange was discovered, “The citrus fruit would be ready to eat after August 1st." 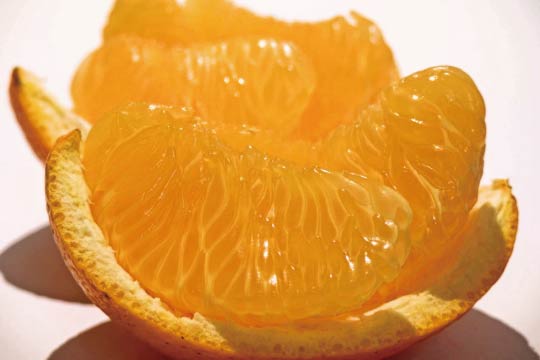 Hassaku orange can be so sour that it makes the nose tip sweat, but it is addictive.

Buntan (Pomelo 文旦) is a variety also called "bontan" and "zabon" in Japanese. It is native to Southeast Asia and was introduced to Japan between 1688 and 1780 during the Edo period by a trade ship traveling between Guangdong and Nagasaki. According to one theory, the trade ship was wrecked and washed ashore in Akune city of Kagoshima prefecture. The fruit was gifted by the captain named Xie Wéndàn (謝文旦) as a token of gratitude for rescuing the crew members. The Japanese name, "buntan (文旦)," was named after the captain.
It is the largest of all citrus fruits, and some varieties weigh more than 4 pounds each. They are also thick-skinned and shelve-stable. If stored properly, the fruit can last for more than a month. The refreshing sweetness, refined aroma, and juicy pulps are treasured characteristics. Many buntan admirers are attached to its slightly bittersweet and excellent aftertaste. Like other citrus fruits, buntan is often gifted to celebrate year-end and New Year. The young child holds a colossal pomelo (Buntan 文旦) to show how big the fruit is.

Kumquat (金柑) is an evergreen shrub introduced from China, where it originated from. Kumquat is spelled a golden citrus (金柑) in kanji characters and pronounced as "kinkan" in Japanese. When used in New Year’s dishes (おせち料理 Osechi ryori), it is spelled as "金冠,” with the same pronunciation, meaning a golden crown to wish for prosperity. (Click here for our previous article on New Year’s dishes, osechi ryori おせち料理.)
The fruit is consumed as whole or the skin only because kumquat’s skin is sweet while the flesh is highly acidic, containing many seeds. Some sweet flesh varieties were created in recent years thanks to breed improvement, allowing whole fruit consumption. The fruit comes in season between early January and late March. The harvest peaks around February. Whole fruit is often cooked in syrup and then candied with sugar or honey or preserved to make dried fruits.
Click here for the Kumquat compote recipe using TREHA®. Kumquat (金柑) is a unique fruit of which edible part could be only skin. It is well known that citrus fruits are rich in citric acid and vitamin C, relieving fatigue, preventing colds, and supporting beautiful skin. Citrus fruits such as satsuma orange, loved by the Japanese, contain a polyphenol named hesperidin. It seems that the Japanese knew citrus fruits are suitable for health by experience. Some interesting stories related to historical figures are passed on.

Mito Komon and Buddha's hand (仏手柑):
Mito Komon (水戸黄門 1628-1701), as famous as all shoguns in Japanese history, was a relative of Tsunayoshi Tokugawa, the fifth shogun and the successor of the Mito domain. Known as a competent ruler, he is often portrayed in storytelling, Kabuki, novels, movies, and TV dramas.
Mito Komon was very interested in medical science and laid the foundation for the medicine of the Mito Domain. He practiced and promoted a balanced diet for maintaining health and encouraged consumption of seasonal vegetables based on the concept of "Ichiju Sansai (一汁三菜)," a meal consists of one soup and three side dishes, which is a standard of the Japanese menu. He was also enthusiastic about herbal research.
The intellectually curious leader brought in the unique citrus fruit called "Busshukan 仏手柑" to cultivate. The citrus also contains the polyphenol called hesperidin. The fruit is native to the Himalayas and India, and its direct translation of the original name is "Citrus of Buddha's hand.” Fast-forwarding to the present, only a few farmers cultivate the fruit, making it rare to find in a retail shop. Still, its unique shape has been valued in flower arrangements and tea ceremonies since the Edo period. It is also decorated in the New Year to wish for prosperous business.
Due to the very little presence of flesh, making candied peels or marmalade using the fruit is suggested. However, such food items were less likely produced as sugar was precious in the 17th century when Mito Komon cultivated the fruit. Hokusai Katsushika (葛飾北斎) and Yuzu citrus (柚子):
Even if you have never heard of the name Hokusai Katsushika, many of you may have seen the woodblock print, Ukiyo-e, shown below. Hokusai Katsushika (1760-1849), also known as Hokusai, is an ukiyo-e artist representing Japanese art in the late Edo period. Hokusai lived extraordinarily long until nearly 90 years old when the average life expectancy was supposedly around 40 years old. Hokusai often made his original elixir with yuzu containing plentiful amounts of hesperidin. He regained his health by drinking the infusion after a stroke attack in his late 60s. This is Hokusai’s yuzu drink recipe recorded in "Katsushika Hokusai Den (葛飾北斎伝), Biography of Katsushika Hokusai" by Hanjuro Iijima.
Chop one yuzu into fine pieces and gently boil in 6 fluid ounces of the most refined sake using a clay pot. Simmer the mixture until the thickness becomes the same as starch syrup. Drink the potion diluted with hot water. Make sure to finish using it within 24 to 36 hours. Since yuzu does not agree with metals, a bamboo spatula instead of kitchen knives is recommended when cutting.
As mentioned in the previous article, taking a yuzu bath on the winter solstice is a Japanese custom. People in the old days probably knew the effects of citrus fruits through many years of experience. The pages from Katsushika Hokusai Den (1893) by Hanjuro Iijima, describe how to make his yuzu drink.

Our special recipe is a tribute to yuzu citrus: Yuzu Fruit Jellies (Pâte de Fruits au Yuzu). TREHA® brings out the flavor and aroma of yuzu while retaining the fresh color to maintain the best appearance. In addition, TREHA® keeps the freshness of the jellies by minimizing "weeping.” Click here for the recipe. It is as good as sweet potato harvesting: Satsuma orange picking.

As we shared in the previous blog, harvesting sweet potatoes called "imo-hori (芋掘り) is autumn leisure, for which kindergartens and elementary schools often make a field trip. Sweet potato digging is also an educational event where children can embrace the joy of harvesting and gratitude to the farmers. Satsuma orange picking is another event featuring the same nature.

Satsuma orange picking, allowing the participants to taste the freshly picked oranges while immersed in nature, becomes a cause for an excursion for kindergartens and nursery schools, and families. Satsuma oranges can be peeled easily without any special tools so that small children can fully enjoy the activity.
Though each farm has a different way to host the event, all-you-can-eat at the site with or without a time limit (about one hour) appears to be typical. Some packages allow the participants to take home a souvenir bag containing 1 to 2 pounds of oranges. The average fee is 8.50 USD for adults (12 years old and over) and about 4.25 USD for children. Allowing you to consume a lot of fresh and healthy citrus fruits, satsuma orange picking is great leisure to endure the cold winter in good health.

Hopefully, we inspired you to develop citrusy dishes this winter.