The aged version of versatile bulb vegetable is gaining attention from culinary expeditors.

What does black garlic taste like? Simply put, it tastes like dried fruit, balsamic vinegar, soy sauce, and molasses, which is rather complex.

The king of vegetables is now aged for a better kind

Name a vegetable with a robust flavor used worldwide in cuisine and any diet, including vegan, keto, and gluten-free. Garlic is a vegetable belonging to the onion family. It has an iconic pungent, spicy flavor that mellows with cooking. Although it is a vegetable, flavoring food is the primary use for garlic. Recently I got hooked on a well-talked-about culinary star, black garlic. While gaining the attention of gourmets in the US, black garlic is emerging through various commercial products, primarily as seasonings. I would not be surprised to see products like black garlic-flavored potato chips or pasta sauces hitting the shelves soon.

Black garlic is an aged white garlic processed under the temperature range between 140˚ and 190˚ F in high humidity for three weeks or longer until desired flavor and texture are obtained. While aging, the white garlic becomes tender and dark in color due to the Maillard reaction, a chemical reaction between sugar and amino acids under heat. This change equals the mechanism of caramelization. What about flavor? Black garlic has a pleasant acidity similar to balsamic vinegar, mild sweetness like dried fruits or rich molasses, and umami resembling soy sauce. The texture of the cloves is much softer and stickier than that of fresh garlic, accompanied by a satisfying bite.

The birthplace of black garlic is under hot debate between China, Korea, and Japan. I have yet to confirm, but I am sure each country firmly claims to be the home country of this traditionally processed garlic, an attractive new flavor in the West. This argument reminds me of my friends’ never-ending debate over whether heavy metal music originated in the US or the UK.

Where black garlic came from is a hot debate.

Garlic was to protect the Egyptian pharaoh

Before going further with black garlic, why don’t we look at its raw material, fresh garlic? Fun facts about this beloved root vegetable have been neglected because it is too familiar to scrutinize.

Consumption of garlic dates back to ancient times. As Richard S. Rivlin (2001) states, “garlic was in use at the beginning of recorded history and was found in Egyptian pyramids and ancient Greek temples. There are Biblical references to garlic. Ancient medical texts from Egypt, Greece, Rome, China and India each prescribed medical applications for garlic. In many cultures, garlic was administered to provide strength and increase work capacity for laborers. Hippocrates, the revered physician, prescribed garlic for a variety of conditions. Garlic was given to the original Olympic athletes in Greece, as perhaps one of the earliest “performance enhancing” agents. It is of interest that cultures that developed without contact with one another came to similar conclusions about the efficacy of garlic” (The Journal of Nutrition, Volume 131, Issue 3, March 2001, Pages 951S–954S).

Garlic was one of the objects placed in the tomb of King Tutankhamun (c. 1332 – 1323 BC.) Due to its strong odor, people believed garlic protected the king’s body from evil spirits. The working class in ancient Egypt was fed garlic cloves to increase their stamina in building pyramids. Interestingly, the academic paper I came across also states, “Whether garlic was also consumed with the same diligence by the upper classes is less certain.” (Page 951S)

I wondered if nobles might have been cautious about consuming garlic due to bodily repercussions and thus primarily used it as a smelly spiritual guardian instead.

While researching the garlic odor, a scene depicting garlic as a spoilsport of love affairs from Japanese classic literature caught my attention. The classic literature, A Tale of Genji, describes the lifestyles of high courtiers during the Heian period (794 -1185). There is a scene where a group of noblemen shares love-life memories and dramas. One nobleman talked about his ex-girlfriend refusing to see him because she is under the influence of a drug to cure seasonal illness, which is, in fact, this bulbous wonder. The cause of a failed date is garlic breath, hinted at during the elegant poem exchange between lovers in high society. The story made me chuckle because this indirect approach to a lousy situation through noble poems appeared very Japanese to me. In contrast, the noblemen in the literature were disgusted and deflated by this story because they anticipated heart-throbbing romance and the unforgettable charms of ex. This storytelling was concluded with the main character’s plead, “I beg you for more tasteful stories.” 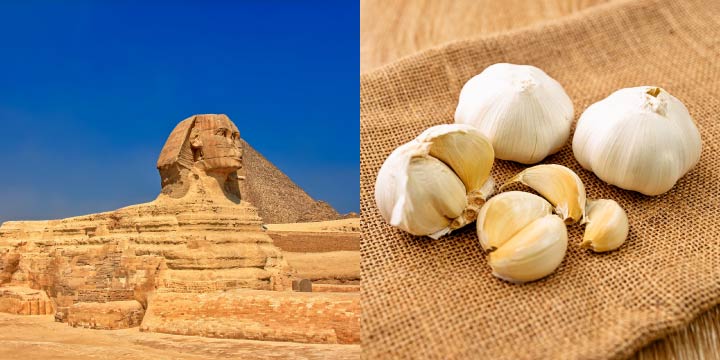 Garlic was considered a spirit guardian in ancient Egypt.

Fast forwarding from ancient to modern times, studies suggest that garlic has various health benefits, such as promoting cardiac, brain, and liver health and reducing the risk of infections, blood clots, and cancer. Some studies have suggested that raw garlic may be more effective than cooked garlic. Sadly, in its fresh state, it is challenging to consume daily because of the intensity in the mouth and the aforementioned notorious results. In addition, living in the 20th century provides few career opportunities to build pyramids requiring us to chew raw garlic cloves. Black garlic can offer a solution because it is low in a chemical component called allicin, which is responsible for bodily odor after consuming fresh garlic, while featuring higher concentrations of beneficial compounds such as amino acids, phytonutrients, and antioxidants during the aging process.

It would be best to remember that black garlic is a compressed version of fresh garlic with a reduced source of the smell. My friend’s mother had whole cloves daily since she loved the taste so much. Her doctor realized the significant change in her periodic blood tests and needed to talk to her. Even though it was a positive change, the doctor wondered what caused it. It is tempting, but I suggest portion control for the peace of your doctor’s mind.

A clove a day keeps the doctor away?

How to make and use black garlic

Are you interested in making black garlic? The process is easy but takes patience. There are many resources on the Internet. My good friend is one of many adventurers seeking an unlimited supply of black garlic. She fell in love with black garlic and started making it herself using a rice cooker from a thrift shop. She had to endure the strong garlic smell wafting in her kitchen during the entire process and finally brought the rice cooker outside. According to her, “It was worth making it after all.” While I am proud of her, those who prefer non-garlic scent room cologne can purchase pre-made black garlic in natural grocery stores such as Whole Foods or Trader Joe’s. I dare to predict that mainstream grocery chains will soon start carrying black garlic because it is highly versatile. Not only consumable as it is, it is also used as seasonings, condiments, and a secret ingredient to boost umami. Bon Appétit magazine shares tips on using black garlic as follows.

I purchase bags from this manufacturer from my hometown and treasure them every night. The company even carries masks manifesting garlic consumption with the writing, “I confess I just ate garlic.” 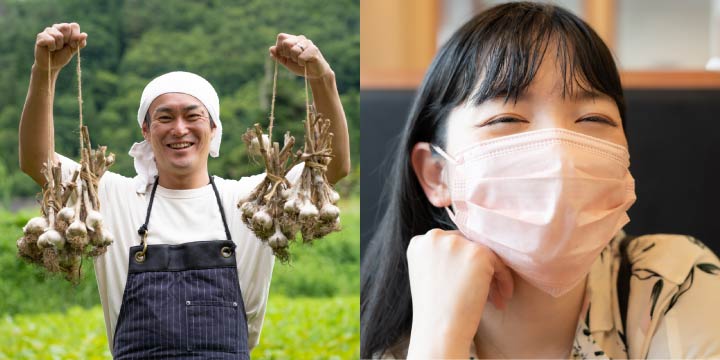 Garlic contributes to a happy smile, even under a mask.