The winter gift season is here! How about sending something nice to notable people who have taken care of us this year?
Team TREHA® @trehalose_sensei
Print
Share

We will dive into the history of Japanese gift-giving customs and trends among the new generations.

Gift-giving customs at a half year mark and year-end

There are two gift-giving customs in Japan, which fall during the summer months, from early July to mid-August, and during the winter months at the end of the year.

"Ochugen (お中元)" refers to gifts during the mid-summer. People show their appreciation or return favors to others, including customers, relatives, physicians, and teachers. The word's origin came from a traditional Chinese event (中元节) on July 15th of the lunar calendar, known as the Taoist deity’s birthday. On the same day, Buddhists honor their ancestors by making offerings to temples or home altars identical to the Japanese Bon Festival. Such customs merged to become the Japanese custom expressing gratitude and wish for good health through gifts during the hot summer season.

Gifts at the end of the year are called "oseibo お歳暮." Like the mid-summer, the year-end gifts are tokens of gratitude towards those who regularly provide goodwill and good service. As designed to return to favor for the whole year, the year-end gifts have greater significance than ones of the mid-summer, which only cover the first half of a year. According to the records, oseibo could have originated from New Year's offerings to the ancestors since it is prepared concurrently. This gift-giving custom began in the Muromachi period (14th-16th centuries) and became prevalent throughout Japan in the Edo period (17th-19th centuries). The gift items were fish, rice cakes (mochi), and food with a long shelf life, including dried squid, typical New Year's offerings. Gift giving was frequent between the stem and its branch families and became standardized into the current custom. 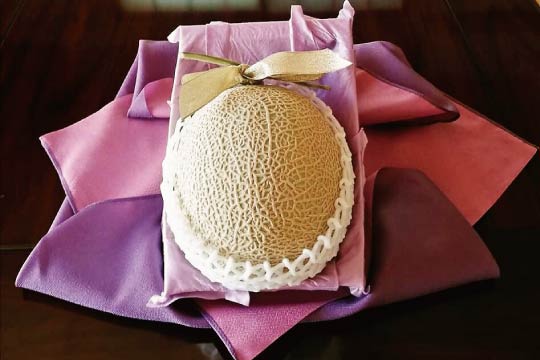 Premium melon as king of the mid-summer gifts, satisfaction guaranteed

The mid-summer gift items show the gesture to wish the recipient's physical and mental health. Good examples are seasonal fruits, desserts like jellies, beverages like beer or juices, and eels or other fish and shellfish that are enjoyable and nutritious for enduring the summer heat. On the other hand, year-end gift items are traditionally geared towards entertaining a large group. High-quality meat, fish, and shellfish, in addition to sweets, tea, and sake, are good examples.

Both mid-summer and year-end gifts used to be handed in person, but the custom is being replaced with the direct shipment from the department through online order.

Two major gifting seasons bring the highest sales volume to Japanese department stores, similar to Christmas shopping. According to some internet sources, the Japanese spend about 3,000 to 5,000 yen (25-45 US dollars) for each gift. The most frequently chosen item is processed meats, including sausages and hams, allowing the recipient to entertain guests in a flash. Various food items in handsome gift boxes are displayed in dedicated floor space at department stores and supermarkets.

No matter how eager kids are to open their gifts, you would not see them ripping the wrapping paper or tearing the boxes in Japan because the wrapping materials could be as fancy as the gift itself. It is considered rude to destroy them casually. Not only the material, the neatness of wrapping counts a lot. The employees of department stores take special training to precisely cover a gift box without any unnecessary creases as quickly as possible. Some retail employers even host an internal competition for the neat appearance and speed. Even a regular gift box transforms into a special seasonal gift with two traditional wrapping materials. One is wrapping paper called "noshigami (熨斗紙)," manifesting a sender's name and the letters either mid-summer gift (御中元) or year-end gift (御歳暮). Another is a decorative knot tied with mizuhiki cords consisting of a set of five or seven paper threads in red or white. The knot signifies the meaning of the gift. Since a ribbon bow is easy to tie and untie again, the knot represents a senders' wish to maintain a co-benefitting relationship, which generates another cause of gift-giving next year. Nowadays, it is common to use white paper preprinted with two wrapping materials.

In my opinion, noshigami wrapping is very convenient because the sender and purpose are easily identifiable. Two traditional wrapping materials are merged and preprinted for convenience.

In recent years, the traditional gift-giving custom is shifting to self-gifting since more people value liberation from obligation or guilt associated with gift-giving. An increasing number of people enjoy a little bit of luxury by purchasing products such as luxurious delicacies, sweets, and alcohol, which are more sumptuous than normal to reward themselves for hard work at the half-year mark or year-end.

There are many products carefully curated for limited occasions during the mid-year and year-end gift seasons. Among all the irresistible lineups, self-gifting items especially stand out at the retail front, which makes sense because there is a high chance to make someone special happy with a gift, which is tested, approved, and genuinely liked by the sender.

This year, a higher-end crab is on my self-gifting list because having an epicurean escape to taste the fresh crab is more challenging than usual.

What would you choose to reward yourself? High quality and expensive crab, even better if someone gave me.