Dr. Maruta thought about trehalose for nights and days, literally. Soon after he dreamt of a culture dish containing the shining colony, he discovered the trehalose-producing enzyme.

Today's blog features Dr. Kazuhiko Maruta of Hayashibara Co., Ltd., who discovered the enzyme which made mass production of trehalose possible using starch in 1992. The interview extended to several sessions, which ended in May 2022.

Trehalose, a naturally occurring sugar, had been a coveted material for researchers, as there was no cost-effective method to produce it in a large quantity, even though many beneficial applications were expected in various fields. Since it was hardly known to the general public, research on the production method of trehalose had been actively continued worldwide, including extraction from yeast or proliferation by plants. However, none of them was efficient enough for mass production, and thus trehalose was very expensive.

The mass production of trehalose was deemed unachievable at the time; however, Dr. Maruta's great discovery made trehalose fit to use in industrial applications today.

The historical discovery is deduced to a boy who fell in love with science: Dr. Maruta grew up observing pond water microbes.

Team TREHA®: When did you first want to become a researcher, Dr. Maruta?

Dr. Maruta: I have loved science since I was a little kid, especially biology, which was more like playing than studying. It was so much fun looking through the microscope... I spent most of my spare time observing the microorganisms in the garden pond of my house.

Dr. Maruta: When I started job hunting, I saw an article about Hayashibara in the biotechnology magazine. I was impressed by its innovative research, including natural interferon, which is unparalleled worldwide. My compulsive impression was that Hayashibara values research work and gives the privilege to scientists to work on cutting-edge research. People told me I wouldn't get a position as Hayashiraba was tightly knitted to the local community in Okayama, for which I had no references. But I contacted the company anyway. To my surprise, I was invited for an interview, so I dashed off to Okayama. When I spoke with the interviewer, I felt my educational background would be immediately valuable. At that stage, I was pretty confident about landing the position.

Team TREHA®: When hiring employees, Hayashibara attaches great importance to personality besides capability and aptitude. The interviewers immediately sensed your cooperative nature, which is open to learning new things.
By the way, what kind of research did you start with after joining the company?

Dr. Maruta: I was assigned to the pharmaceutical research lab, as I'd hoped, working on research on bioactive substances, including interferon. However, after two years without satisfactory results, I became frustrated. Then I had a temporary assignment to help the company’s glycoscience research lab for two months. Now that I think about it, it must have been a pre-determined time before Hayashibara officially transferred me to the new post at the Amase Institute (the glycoscience research center.) I had mixed feelings about the change because it was utterly different research from what I had done. The key to great discovery lies in persevering with the steady, daunting work and thinking outside the box.

Team TREHA®: So your research topic has changed?

Dr. Maruta: "Find something new." That was the first assignment from my new boss. As you know, Hayashibara has been pouring its resources into the research and development of carbohydrate products using microbial enzymes, as the company’s research work originally started with this line of lab work. If I were to interpret my boss's order in simple words, it was "Make a new carbohydrate product using starch." The managers appeared to have a broad idea of a new carbohydrate product, which is uniquely different from a regular product. Since I was a total novice in the glycoscience research lab, I had no idea what to look for or how, but I just had to get started on this new task.

Team TREHA®: Can you briefly tell us how to find new microorganisms and enzymes that play an essential part in the production of carbohydrate products?

Dr. Maruta: The first step in finding new microorganisms and enzymes is to collect soil samples from random locations. As there are approximately one billion microorganisms in one gram of soil, we first need to increase the count of microorganisms until they are visible as a colony to identify the valuables. A colony differs in color, shape, and size depending on the type of microorganism.

The photo above shows colonies of microorganisms cultured on the plate. After a mixture of soil and water is spread on the agar medium and incubated at 25 to 37°C (77 to 99°F) for two to three days, microorganisms grow on the surface and become visible as colonies. The colonies are then separated by variety and further incubated to a larger size.

Various carbohydrate sugars can be produced from starch or other substances through reaction with microbe-derived enzymes. The suspension with ongoing enzymatic activity was analyzed using a thin layer of chromatography to determine if a novel enzyme is viable to develop the desired carbohydrate sugar.

I completed the daunting task of screening approximately 2,000 different soil samples over two months without a defined experimental methodology. The lab even distributed vials with spoons among employees to collect soil samples when returning to their hometowns.

"I thought I was dreaming. I finally transformed the impossible into the possible." – said Dr. Maruta.

Team TREHA®: It took you only two months to discover the new enzyme, right?

Dr. Maruta: Yes, but it felt much longer emotionally since I was not getting any results. I could not help heaving a sigh of despair each day, thinking, "What in the world am I doing?" But one night, I had a dream. A petri dish containing a soil suspension appeared above me, lying on the bed. When I took a closer look at it for inspection, I noticed a glistening and shining colony on it. Then I woke up!

Two days after I had that dream, I discovered this miraculous, trehalose-producing enzyme. The microorganism, which produces the enzymes, was found in the Okayama City soil where Hayashibara's headquarters is located. After discovering the enzyme, I focused my research on proving the material produced by this enzyme to be indeed trehalose by scrutinizing its properties and structure.

Industry experts at the time believed it was impossible to produce trehalose directly from starch \because of its bond energy. So, even my fellow researchers were initially very doubtful about my discovery. I was so obsessed with the verification work of trehalose. I stayed up late at night without paying any attention to my surroundings. Each day I arrived at work in the morning, my boss and colleagues would soon get together around my desk asking, "How is your work going? Did you figure out anything?" This continued for more than two weeks. Finally, I verified that the carbohydrate sugar produced from starch was trehalose. The next challenge was to elucidate how trehalose was produced from starch, which was even more challenging than the previous work. Ultimately, I believe the discovery was rooted in the process or ideas unbound to a fixed mindset.

Team TREHA®: Hayashibara has many patents and developmental achievements, and the production methods using enzymatic reactions are Hayashibara’s forte. How did you feel when you accomplished a discovery you dreamt of?

Dr. Maruta: The joy and excitement were indescribable. I was certain trehalose would become one of Hayashibara's leading products in the future because it can be applied to a wide range of fields due to its properties.

Team TREHA®: It has been 30 years since your great discovery. Trehalose has become Hayashibara's mainstay product, as predicted. Many food items at Japanese supermarkets and convenience stores have “trehalose” listed on their ingredients labels. Moreover, the applications are not limited to the food industry but expand to pharmaceuticals, cosmetics, agriculture, and many other fields. How do you feel about the outcome?

Team TREHA: Last but not least, what are your goals for the future?

Dr. Maruta: As a scientist, I established a significant milestone from the series of trehalose research and the flourish of successful applications. It was a special event that made me feel like a pastel-colored spotlight was cast on my life stage. I want to thank everyone at Hayashibara and trehalose users for what has been accomplished so far. I currently stepped out of the research field. My new title is a marketer who develops new markets for trehalose. As you all know, the world has been calling for a sustainable society in recent years. I believe trehalose takes care of food loss issues and healthy life expectancy. I sincerely hope that trehalose will further expand its applications for a better future of human life and the earth."

Team TREHA®: Thank you so much for your time today. 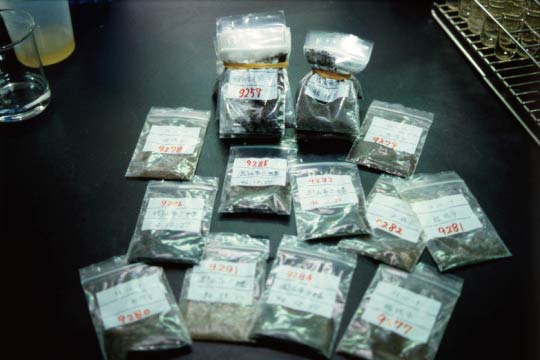 Soil samples collected from many places